Disembarking from the number 67 bus, I’m standing on a pavement in Stoke Newington, on a cold grey Sunday morning, early in May. It’s unseasonably chilly, even bitter at times, but I’m heading to meet an old friend for breakfast in Church Street, and so the anticipated warmth of a cafe undoubtedly appeals. But as I walk a few yards down from the bus stop, I’m distracted by the site across the road and the memory of something that’s hovered around in my head for many years. I’ve about 15 minutes to spare before my rendezvous, and what seems an initially unprepossessing option is suddenly of overriding importance. With that driven sense of there being something that needs to be done, I find myself crossing the road and approaching the magnificent and slightly dilapidated grandeur of Abney Park Cemetery.

Four stone pillars that look like they should support caryatids, or ancient gods, mark the entrance. I pass through and immediately spot a visitor centre that at first appears closed. But after rattling the door handle, I’m greeted by a gentleman with an arresting beard that would surely have been the envy of the man  about whom I was to make an enquiry. I ask somewhat fancifully if he might know if the artist Edward Calvert is buried in the cemetery. I more or less know this to be the case, from some research I did many years ago, and my question is greeted with confirmation by way of an affirmative nod, followed by a congenial chat in the small visitor office. Then John, the name of the attendant, books me in for later in the week, to show me Calvert’s grave, as it would seem it’s not the most easily accessible of the plots on the site.

I arrange my return visit for the middle of the coming week, then promptly head off for a lively breakfast amongst an extremely cosmopolitan crowd at the cafe along the road. Fun, food and electric conversation seem in plentiful supply, but one is reminded for a moment of the rigours and horrors of life in other parts of the world. I gaze beyond my companion to the spine of a book that proclaims the culinary delights of Aleppo, and on the shelf above is a neat little row of decorative tins, containing dates from Palestine. for a while one is confronted with a strange disconnect, between the here and the there. The quotidian thought processes are dealt a nudge, even a jolt, before some quiet reflection follows.

Heading back on the 67 bus, not for the first time I find myself thinking about the “Summer of Love”. Commemorated by its 50th anniversary this year, maybe the number of the bus triggered the mental discourse for a conveyor belt of rich musical memories drawn up from that much vaunted year.

Back home indoors and at the computer, with the imagination more than stimulated, I am perusing all things Calvert. It was many years ago that I first encountered ‘The Chamber Idyll’ in actuality.

It is Calvert’s magnum opus, a tiny wood engraving measuring 41mmx76mm and so sumptuous it just demands your gaze. The scene, a vision of harmonious erotic love, lures you in, as if permission has been granted, to be both spectator and participant at the same time. Fellow “Ancient” and friend Samuel Palmer, described the diminutive masterwork, as “doubly condensed poetry” and one can hardly disagree with him. It is a charmer for sure, the bucolic setting in quiet mood of peace and tranquillity, lit by stars above the horizon to the right, and moonlight through an open latticed window to the left. There’s a fecundity in the symbolism already in place, prior to any lovemaking and there’s a sense of expectancy that is palpably loaded with desire as we are voyeuristically invited to enter their bedroom.

Created in 1831, it was Calvert’s final wood engraving. Age, just 32 when it was completed and with a long life in front of him, yet it seems terrible that there were not more. Did he possibly sense it wouldn’t be bettered from within his own oeuvre? An artistic output followed but nothing ever again was to match his miniature masterpiece. It was in 1824, when Calvert and Palmer were introduced. Disciples of a sort to their mentor William Blake, both got to know him personally; however, it seems that their own mystical and visionary creations grew out of those gatherings down in Shoreham, Palmer’s “Valley of Vision” where cyder fests were not uncommon and oh, oh, to have been there.

I return to Abney Park Cemetery on the 10thof May to meet my guide John as previously arranged and this time it’s a glorious morning, warming up nicely following the recent cold spell. As we set off, I’m led through what can only be described as paths through woodland, monuments to the dead both to the left and right of us, ageing by the day like their once human counterparts below ground. Stones are on my mind and have been in that interim period since my first visit here and not just gravestones but pebbles too.

An interesting discovery came about upon my reading a little more about Edward Calvert. A few people have said to me in the past with that slightly quizzical, mystified air, do all roads lead to Plath? Now that might be stretching things somewhat but her net certainly casts wide and as we strike through undergrowth, clambering amongst overgrown graves, John with printed out plot map in hand, she’s linking up again. 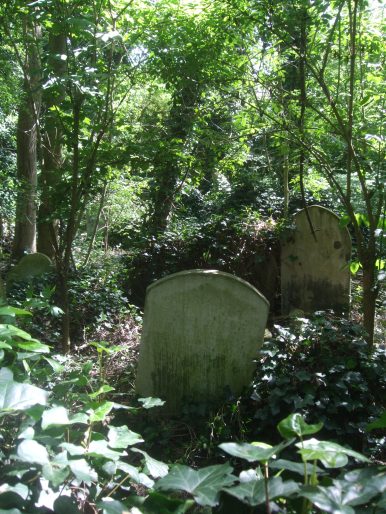 We find the sandstone headstone for Calvert, his name there just discernible. A lime green lichen coats the stone but I would have needed to take a rubbing to pick up the mason’s handiwork to be able to read the inscription “He would be welcomed in Helicon.” Before he was laid to rest here in Stoke Newington it was said he was quite a sight out in the local streets, with a long beard and sage like presence. But in 1799 when he comes into the world, he arrives in the small Devonshire village of Appledore on the North Devon coast, where he would spend his early childhood. That biographical detail, was the moment when it chimed with a Plath connection and not only that but with her grave too.

According to Ted Hughes in the penultimate poem from his 88 poem-long collection “Birthday Letters”,

Carried from Appledore as if we were herself”

referencing the gathering of items from the beach off the small Devonshire resort by the children to adorn their mother’s grave on the hilltop at Hepptonstall in Yorkshire. It’s perhaps the most tender moment in “The Dogs Are Eating Your Mother”, a poem otherwise charged with vitriol for those he accuses of picking over the details of Plath’s life.

In the British Library’s extensive collection of the Hughes archive there exists a reference on pink sheet 69 to a visit made to Appledore, dated “Jan 5th1964 and therefore, just under a year following Plath’s death. It describes a car drive to the town, made with Frieda, Nicholas Olwyn, Elizabeth

Compton and her son James. Elizabeth died sadly, earlier this year. (See ref Plathinfo Jan 2017). I didn’t have the pleasure of meeting Plath’s friend, however in a beautifully distilled moment of pure crystallised joy, I did speak to her briefly on the phone and somewhat extraordinarily from the confined public bar setting of Stubbing Wharfe, immortalised in poem 43 of Birthday Letters and where Ted and the pregnant Sylvia were drinking and contemplating what seemed a bleak outlook, until the light relief moment of the bowlers arriving.

Gail had passed me her phone and a delightful voice spoke into my ear, “Is that Tony? Thank you so much for the beautiful painting” The painting being The Moon And The Yew Tree piece I did, for Gail’s and Elizabeth’s book, “A Year’s Turning” The ascent to the top of the hill to visit Plath’s grave was an unforgettable experience, made on a day the setting for which was worthy of a Gothic novel. The black trees dripped incessantly from what had been recent fine rain and a fog hung about the hill, colourless apart from two distinct shows of red; the red rose I was carrying to place on Sylvia’s grave and we seemed to be taking her favourite colour up to her.

Back on the 67 with a panoply of thoughts spinning in my head. Did any of those pebbles or sea-shells brought up from Appledore, survive the souvenir hunters, I wondered? Did one perhaps work its way down into the earth, submerged by years of harsh weather and endless visitors trampling the plot, getting closer perhaps to the poet’s remains and like the wedding present scissors, somewhere buried in the garden at Court Green, tantalisingly and beguilingly out of sight? The North London Cemetery at Abney Park is an absorbing experience and home to countless species of bird, butterfly, and mammal. Wild flowers and beautiful trees grace the final resting place for the artist from Appledore.

The number 67 trips my thoughts and I’m back with The Summer of Love. 50 years on, from that unforgettable music and the colour that came that year, my fifteenth birthday saw the Beatles unleash their epoch-making “Sgt. Peppers Lonely Hearts Club Band . Many more classics arrived the same year, not least Love’s unclassifiable masterpiece, “Forever Changes”, which reaches near veneration status for many. The final release from the band’s classic line-up featured both Arthur Lee and Bryan MacLean. Sadly, that incarnation seemed to come undone over the bewitching Stephanie. If anyone knows who, Stephanie does. Back then it wasn’t unusual for a band to release two albums in a year and Love did not disappoint . Da Capo had been released earlier in 67 and ‘contained perhaps their most sublime few minutes and there were no small number of them. The two minutes 49 seconds of “Orange Skies” written by Bryan and sung by Arthur swoons and caresses the ears, through a medley of jazz, scat, bossa, flamenco and who what else in between ,waltzed over by a flute played so lyrically by Tjay Cantrelli. It’s the musical equivalent of A Chamber Idyll”, perfect in every way and it is a testament to the beauty of love itself. Why not listen to it here “Orange Skies on YouTube?